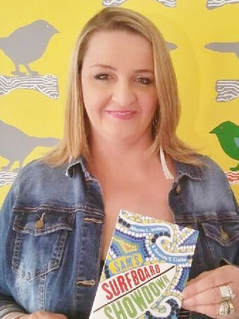 Allayne grew up in the coastal fishing town of Kingston South East, South Australia. She’s the recipient of three SA Arts grants, a Board Member of the Salisbury Writers' Festival, and she helped to establish the Women's Professional Development Network Book Club at the University of Adelaide.

Allayne’s middle grade title, Paper Planes (Scholastic) was a 2016 CBC Notable Book and shortlisted for the Adelaide Festival Children’s Awards for Literature. Her other titles have appeared on similar lists, including the Inkys and the Premier’s Reading Challenge. In June 2017, Allayne released a middle grade novel, A Cardboard Palace (MidnightSun Publishing) and Swedish rights have been sold. On 29 January 2018, she’ll release a YA novel The Centre of My Everything with Penguin Random House, and in February 2018, a junior fiction novel with Scholastic, Sam’s Surfboard Showdown, co-authored and illustrated by her sister, Amanda S. Clarke.


Great to meet you, Allayne. Let’s get the interview underway.


Is this your first published book?


This is my third YA novel, seventh publication.


The Centre of My Everything


Contemporary YA realism. Upper YA.

Is it a series or standalone?


Are an agented author?


I am now. I wasn’t when this novel was accepted.


Which publisher snapped up your book?


How involved have you been in the whole publishing process of your book?


Working with PRH has been nothing short of brilliant. They’re communicative, inclusive and considerate. I feel like I’ve been consulted at every turn. I’ve relished the experience.


Do you have another job?


When I first began writing this book eight years ago, I worked fulltime in administration at The University of Adelaide. Approximately three years ago, I quit to write fulltime—and to finish this bloody book!


Did you receive many, if any, rejections prior?


I lost count of the rejections. However, it’s a bit like the famed number of rejections JK Rowling received. When recounting that story, what they don’t focus on is how many times she polished that manuscript prior to the next submission. Essentially, I kept working until I got it right.


What created/what were you doing or watching when the first idea for this book sneaked up on you?


This novel has burned in me since childhood. It’s dedicated to my step-father

(whom cared for me from the age of five) and it explores issues close to my heart. Love is a great motivator, and I’ve written this story as a means of reflecting my love for my step-father and all he has ever done for me.


How long did you plot/plan until you started writing it?


There certainly wasn’t an architectural approach to this novel. I sat down, started writing and let the voices/scenes etc come to me. In hindsight, it’s probably why I took so long to get the damn thing right!


Once you started, did the story flow naturally or did you have to step in and wrestle it into submission?


I think I earned a black belt with this baby. It was thoroughly disagreeable from start to finish.


How many drafts did you write before you let someone read it? Who was that someone?


I read a very early version of this manuscript to a crowded Women’s Breakfast, going back some seven years ago. Judging by the reception, at that point, I hadn’t got it right. I recall many grimacing faces staring back at me. I suspect attendees were conservative and found the language and the things I portrayed crass and confronting. Not long after that, I let my friend/author, Vikki Wakefield, read it. There were years between Vikki reading the initial version and the final one, however. Don’t ask me how many drafts there were during that period – I lost count!


Did you employ an editor/proofreader or did you have a critique partner/beta readers before you started querying?


No. Somewhat stupidly. Maybe I would’ve had earlier success had I done this. I was arrogant. Delusional. Excitable. I always blow early.


Roughly how many drafts did it take before you sent the manuscript off into the real world?


I lost count. I shipped it round to everyone, polishing between each submission. In hindsight, I was an overzealous idiot. I sent it out before it was ready. (See above – I always blow early!)

How many drafts until it was published?


If you mean drafts with the publisher, I’d say once it was accepted, there wasn’t much to do structurally. It was more ‘on the line work’, plus inserting/reviewing a handful of scenes. There were probably six or seven rounds of shipping it back and forth to the publisher.


Has the book changed dramatically since the first draft?


Absolutely. The current version is told from four POVs. Initially, there were eight. Eight!! What the hell was I thinking? That, and during the editorial process approximately 10,000 words were cut.


Are there any parts you would change even now?


I doubt any author is ever completely satisfied with the final product. We’re forever nitpicking. However, there comes a time when you need to step back from your painting and put down the brush. I imagine that in years to come I’ll revisit this work and think I could have done this, done that. (I’ve done that with other stories!) But that’s the benefit of hindsight, and when you’re in the thick of it, it’s impossible to have such clarity.


What part of writing do you find the easiest?


What part do you find the hardest?


Setting description. I suck at it. It’s like pulling teeth. But maybe that’s indicative of how I read; if there’s a paragraph devoted to how the sun/sky appeared, I’ll skim it and skip to the action. I’m impatient like that. The prose has to be utterly captivating to keep my attention.


Do you push through writing barriers or walk away?

I’ve been publishing for ten years now. During that time I’ve learnt that a ‘barrier’ is simply a problem that requires solving. You may have written yourself into a corner and need to unpick a whole scene and rewrite it before you can proceed. You may be unable to see the way forward in the direct instance, but you can see the bigger picture. It boils down to finding the answers. Sometimes it takes months for the penny to drop. Afterwards, you find yourself thinking, Why was that so hard?


How many projects do you have on the go at the same time?


Do you think you are born with the talent to write or do you think it can be learned?


I think storytelling is a skill largely learned in early childhood and dependent on a need for that skill. As a kid, out of necessity, (for reasons I won’t bore you with), I became good at stretching the truth or telling versions of it. Also, I was surrounded by family members, particularly my Nanna, who knew how to tell a good yarn. Growing up in a small country town, I was drawn to books and stories as a form of escapism and proof of a big, wide world outside the narrow confines of my existence. It wasn’t until I discovered the work of Judy Blume in my early teens that I realised the power of story and that it can be used to changed hearts and minds. That’s when I really fell in love. Story could be used for advocacy! I’m still not convinced I know how to write, but I know I have an ability to thread together a good tale.


How many future novels do you have planned?


As many as I can produce before I’m stalking (make that shuffling) the halls of a nursing home.


Do you write other things, such as short stories, articles or blogs?


Nope. Lazy, aren’t I? As part of my last role at the Uni, I wrote the research stories of academics, translating complicated projects into ‘plain speak’ and delivering it in an entertaining journalistic way.


What’s the highlight of being published so far?


Where do I start? Being surrounded by creative types, many of whom I consider the real deal (rather than myself who is just a hack.) Forming friendships with those writers/artists. Meeting Jimmy Barnes (*I wrote a junior fiction book, Barnesy, and he signed it for me – squeal!!!) Receiving autographed books from Judy Blume (because I wrote to her and told her it was she who inspired me to become an author.) Getting to talk to school students about writing. Working in my trackpants. That moment when the box of books finally arrives, you cradle them for five minutes, staring with wonder at what you created, and then someone asks you, Mum, what’s for dinner?  Giving voice to people not blessed with the skill of storytelling, like my friend, Jarko, whom I wrote about in Paper Planes. (Jarko is a Bosnian refugee.)

Give me one writing tip that works for you?


Write about what fires you up. Underpin your work by exploring something you want to say or an idea you want to convey. If you’re passionate and you care, the words should flow.


And one that doesn’t.


Some folk enjoy writer’s prompts. I can’t think of anything worse. I loathe being put on the spot and being told to create something at will. I dodge any writer’s course that lends itself to this task. Or excuse myself to go to the bathroom.


Can you give us a clue or a secret about the next book?


I have two in the works: one contracted, the other a WIP. The contracted one is an early YA novel with a personal bent, exploring my teenage years battling chronic illness. (Which extended into adulthood.) The WIP is my first crack at comedy, and about a bunch of misfits thrust together on a road trip across rural SA.


Such great insight into your books and your writing life, and congratulations on your many successes so far. Thanks so much for joining YAtopia today, Allayne, and we wish you all the luck with your books, old and new!


If you would like to find out more about Allayne’s work or to keep up to date with her new releases or get yourself a copy of her books, these links should do the job. 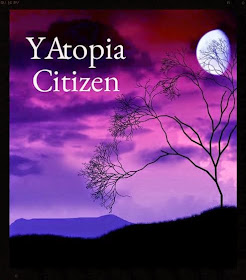